Nigeria's GDP drops for the 4th consecutive quarter. What does this mean for the property market? 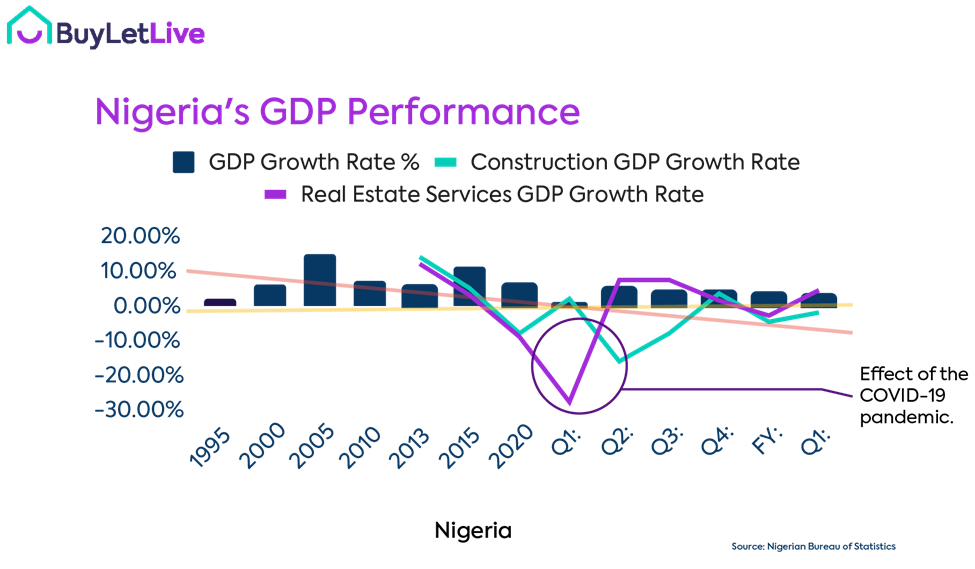 Since the Nigerian Bureau of Statistics (NBS) started tracking the real estate and construction sector in Nigeria, we have seen very strong correlations between the performance of Nigeria’s GDP as a whole, and the real estate services and construction sectors. Typically, as in most economies, the real estate services and construction sector amplifies the performance of the overall economy. Particularly, we have seen these sectors perform much better when the economy is booming and also dropping significantly during periods of recession. Since Q2:2021, Nigeria’s GDP had dropped 13% Quarter on Quarter, and because it has an impact on Real Estate and Construction, we are concerned about how this will affect the performance of the property market in the coming quarters. In this article, we will be discussing the sector that has performed in the past, and what to expect in the coming future, but before we dive in, let us get some background from the numbers.

The telecom deregulation/GSM introduction in the early 2,000s alongside the Banking reform in 2015 positioned Nigeria’s market for growth.

With the establishment of the Decree 75 of 1992, the telecommunication industry in Nigeria saw massive liberalisation that ushered in the creation of the Nigerian Communications Commission (NCC) and opened up the terminal end equipment market to competition and private sector involvement. The impact of this was the extinction of the NITEL regime, which was characterized by poor communication service. Although NITEL still retained its monopolistic rights, new players were able to come into the country and spurred phenomenal economic growth between 2,000 and 2005. This was further exacerbated by the introduction of the Global System for Communication (GSM) in 2001 which brought Econet (now Airtel) and MTN into the market.

In 2005, the Federal government in an attempt to reform the banking sector, introduced the Bank Consolidation Policy. In particular, it took steps to address safety, soundness, and accessibility in the banking sector, by lowering entrance barriers, liberalising lending and savings rates, establishing an interbank foreign currency market, deregulating interbank lending, and privatising a number of banks and financial institutions. This reform alongside the telecom deregulation stabilised the economy between 2005 through 2014 before the economy took a negative turn. To date, the Nigerian telecommunication and banking sector is now a significant economic driver for the country, accounting for more than 34.2% of the entire market capitalization of the Nigerian Stock Exchange's equity market (NSE).

Even though the NBS just started tracking in 2013, there is sufficient evidence of strong ties.

Data from the NBS depicts that even though sector contribution has been relatively stable, the growth rate is still low. In economics, the nominal value is measured in terms of money invested in a sector. A real value is one that has been adjusted for inflation.

In terms of the performance of the Nigerian Real Estate and Construction sector in nominal terms, the sector has seen growth over the period, but the impact has historically been eroded by inflation. The 2016 recession and the COVID-19 pandemic further pushed the industry into negative territory and have remained low ever since.

While the future may look unexciting judging from the past performance of the real estate and construction sector in real terms, the emergence of technology is driving phenomenal growth. Additionally, we expect that the come-back rush will continue to provide an additional boost to construction GDP in the coming quarters. Like other conventional industries, real estate has not altered much in recent years, but the emergence of Protech companies is a sign that it is beginning to evolve. We are happy to see Nigerian businesses flourishing in the wake of the new technological wave and are leveraging technology to disrupt and enhance the way we buy, rent, sell, plan, construct, manage, and make choices on property investments and we are excited to be playing a key role in driving the sector to prosperity.

Would you like to sell, or rent your property faster and at no marketing cost? Login to BuyLetLive.com to create a free account and generate leads for your projects.

In the last 12 months, Nigerians have referred to the economic situation as very daunting, especially for new renters in Lagos. With inflation surging over 20% in August 2022, the economic climate has not been very favourable for most low to middle-income earners in Nigeria. As the rising cost of goods and services continues to drive people to spend more in exchange for fewer items, Nigerians are constantly looking out for opportunities to cut down their expenses.

One way we have seen this play out is in regard to new leases. Over the last half year, our interaction with real estate agents in Lagos has shown that existing tenants who before now considered moving to new apartments are reconsidering. The reasons for this move seem obvious. Cost! When we dug deeper, we found out that moving at this time can cost you almost twice what it will take to continue in your current space, and prospective renters have come to this realization. But why is this?

If you are looking to rent a new apartment, it is most likely that you will spend 20% more for the same type of apartment in the same location than you would have one year ago. For tenants who have stayed long in their old apartment, the percentage increase will likely be more than that. Where the apartment is newer, especially with modern amenities, the additional premium being charged by Developers and Landlords can go as high as 30% or more depending on the location. When considered holistically, this additional rental burden is a major discouragement for people looking to relocate or move into newer apartments.

Agency commission, legal fees and caution deposits can cost as much as 50% of the rent.

In most parts of the world, traditional estate agents' fees range from 0.5% to 5%, depending on the value of the transaction and negotiating power of the parties. In the UK for instance, the range is 0.75% to 3% according to MoveWise, a UK-based real estate advisor. In the US, the commission is usually between 4% to 6%. Across most African cities, the percentage is higher and can range between 5% and 10%. We have found that for residential rentals especially of less than ₦10m value, most agents usually insist on a 10% agency commission. In some locations around Lagos, they can go as high as 20% for rental properties of less than a million. In addition to this, a 10% legal fee is usually mandatory, and some landlords can charge as high as 20% extra as a caution deposit. The impact of this is that it shoots up the total amount that prospective tenants end up paying for new leases, and has been a major discouraging factor for most prospects.

Relocation costs can make things worse, but outside the financial cost, the hassle that comes with it wears out quite a number of people. Based on a sample relocation cost quote we got from Packmyload and a number of other Nigerian-based logistics companies, it costs a minimum of ₦150,000 to move furnishing items in a 2-bedroom apartment in Ikeja to Lekki Phase 1. Judging from the average rental price data that we are currently tracking Lekki Phase 1, this means that a prospective renter will need to pay between 5% and 10% of the rent on logistics.

When considered individually, these costs may be insignificant but can sum up to almost the same amount that a prospective tenant is paying as rent, or even more. What has been your experience with renting a new apartment in Lagos? Share with us by sending a DM or commenting on our social media handles.

If you are looking to rent or buy an apartment or get a shortlet, go to BuyLetLive.com and find properties that meet your requirements. If you are an agent, developer or landlord, visit the signup page on BuyLetLive.com to create an account and advertise your properties.

In most parts of the world, there is so much prestige attached to owning a home. In a research publication by NOI Polls in 2013, 85% of Nigerians who were surveyed, indicated that they would like to own their own personal houses if they had access to a mortgage. While owning a home may appear attractive to a number of people, renting may be a smarter choice for several reasons. Outside the upfront financial implication that comes with an outright purchase, evolving work and lifestyle cultures can are make renting an accommodation more attractive than purchasing. In this article, we dig into the implications of home ownership across multiple countries, providing reasons why renting could be a better choice for you than purchasing out rightly.

To start with, the rental cost in most cities is rising as property price continues to surge 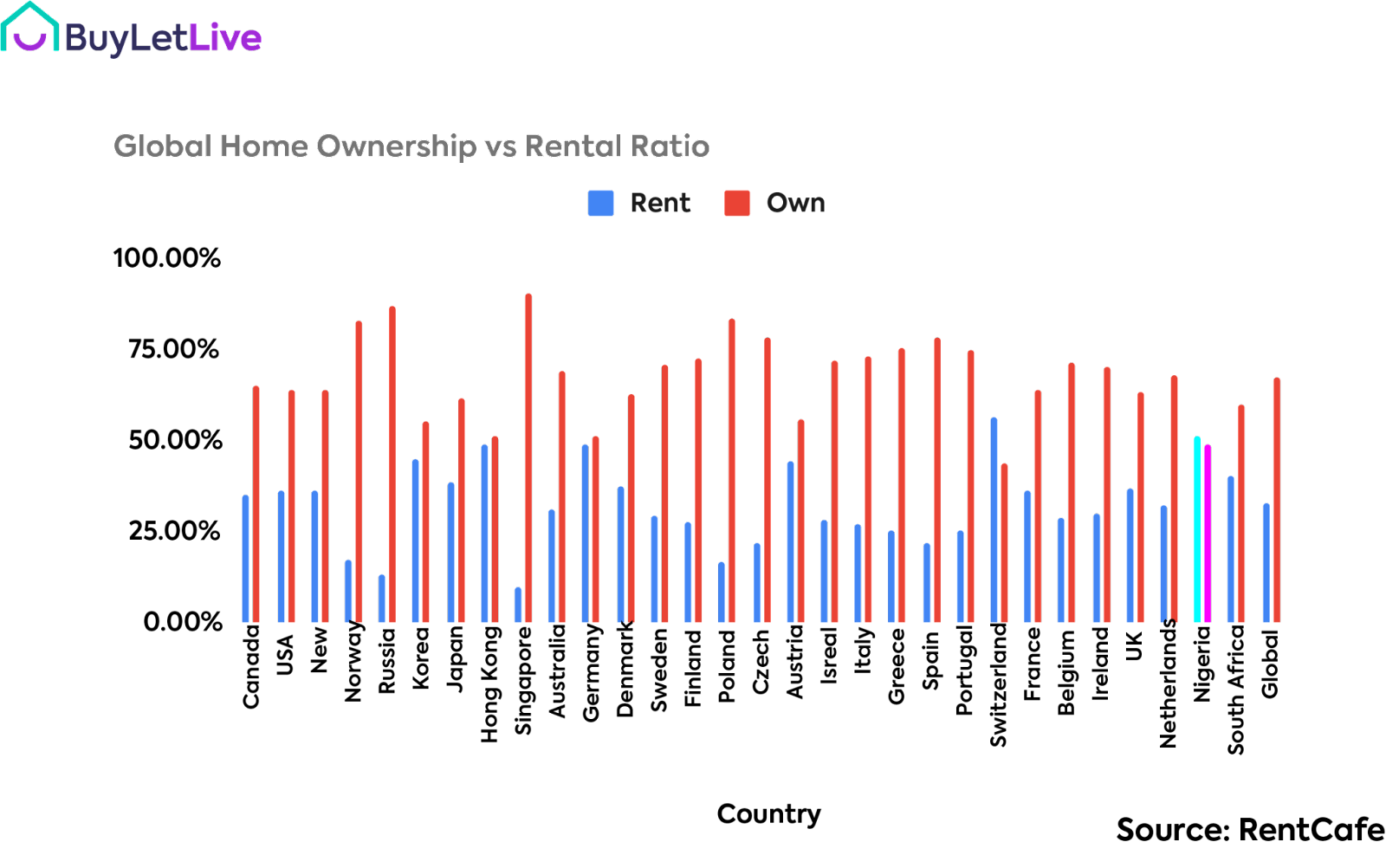 Although 68% of the world’s population currently own their homes as reported by RentCafe, more people across the world are becoming cost-burdened by rent. As property prices continue to surge, more people are less likely to afford to buy their own homes, making renting a more sustainable option. Let’s take a closer look at the other factors associated with home purchases.

Buying property is also very expensive and almost impossible for most of the world’s population to afford without aid. In even moderately priced places across the US, it will take median wage earners approximately ten years to save for a 20% down payment, according to Libertina Brandt of Business Insider. According to research from Unison, it will take the average earner up to 12 years to save up the down payment for a property in Columbus, Ohio.

The average earner in San Francisco will need to save for about 40 years, and those timespans extend significantly farther for people who want to reside in even more pricey locations. Even though renters might need to put down a security deposit, it will almost certainly be significantly less than a down payment and closing charges. In Nigeria and across most African cities, it will cost an average earner almost a lifetime to save up to purchase a property, and renting can be more sustainable than purchasing for many people. 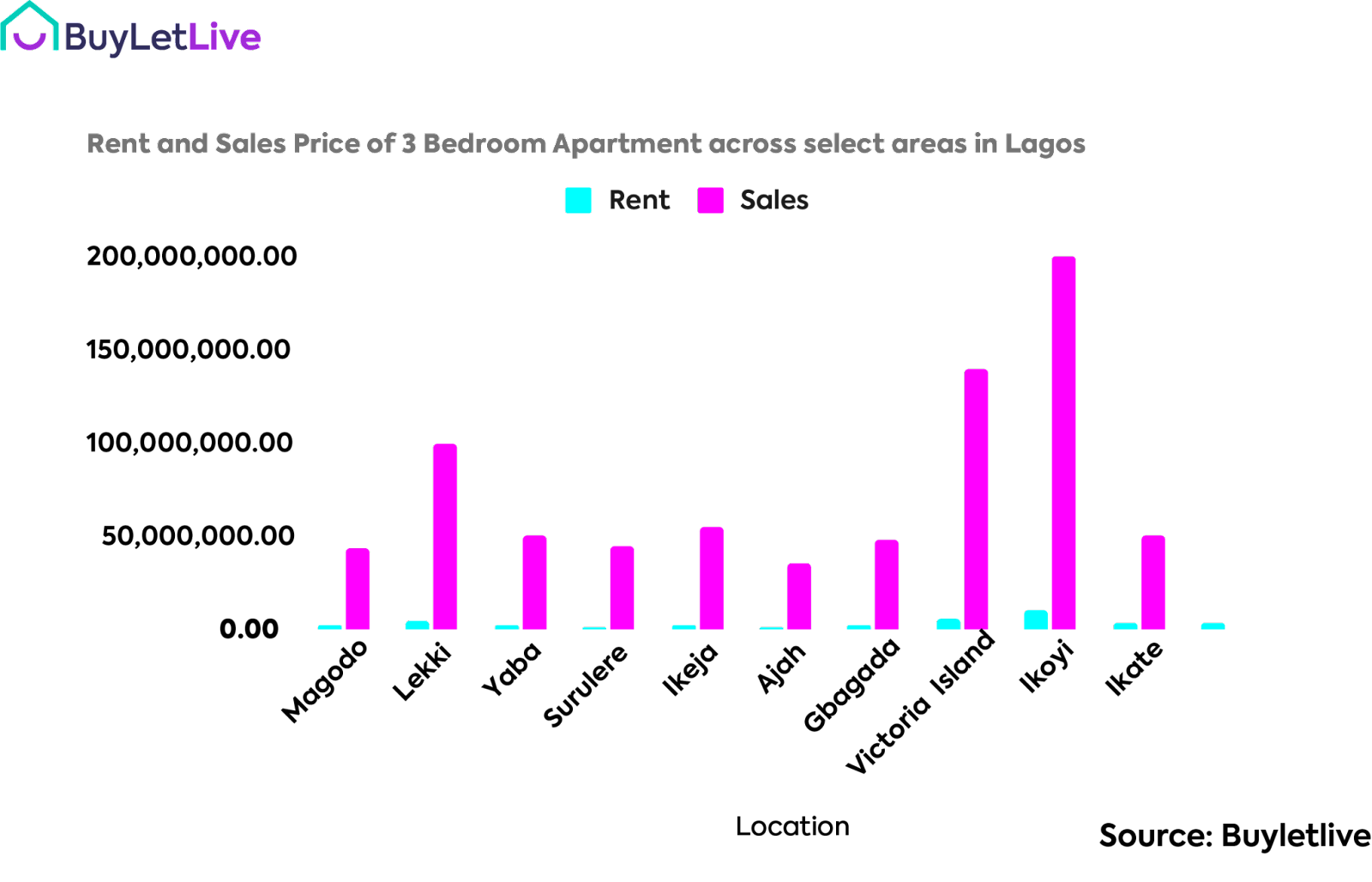 Outside the initial cost of purchasing a home, there are also annual recurring expenses that are typically borne by landlords. One of such is government taxes and levies on real estate. This can range from stamp duty to annual rental income tax and can significantly push up the costs associated with home ownership. Stamp duty can range from 10% to almost 15% of property value or more in most countries. Even when the owner decides to sell, the gains realized on the asset is also subject to taxes, and can range from nothing to 30% in most countries. Outside the financial burden, the process of administering these taxes is sometimes very complex with very detrimental repercussions for non-compliance.

Renting provides more freedom and flexibility as to where to live

A research article by McKinsey reported that 35% of the American population across all kinds of jobs, in every part of the country and sector of the economy, including traditionally labelled “blue collar” jobs in 2022, have the opportunity to work from home five times a week. Across the world, the global workplace has evolved. Geographic location, academic qualifications and other traditional considerations for employment are becoming less important and employees now have more flexibility to work from anywhere in the world. 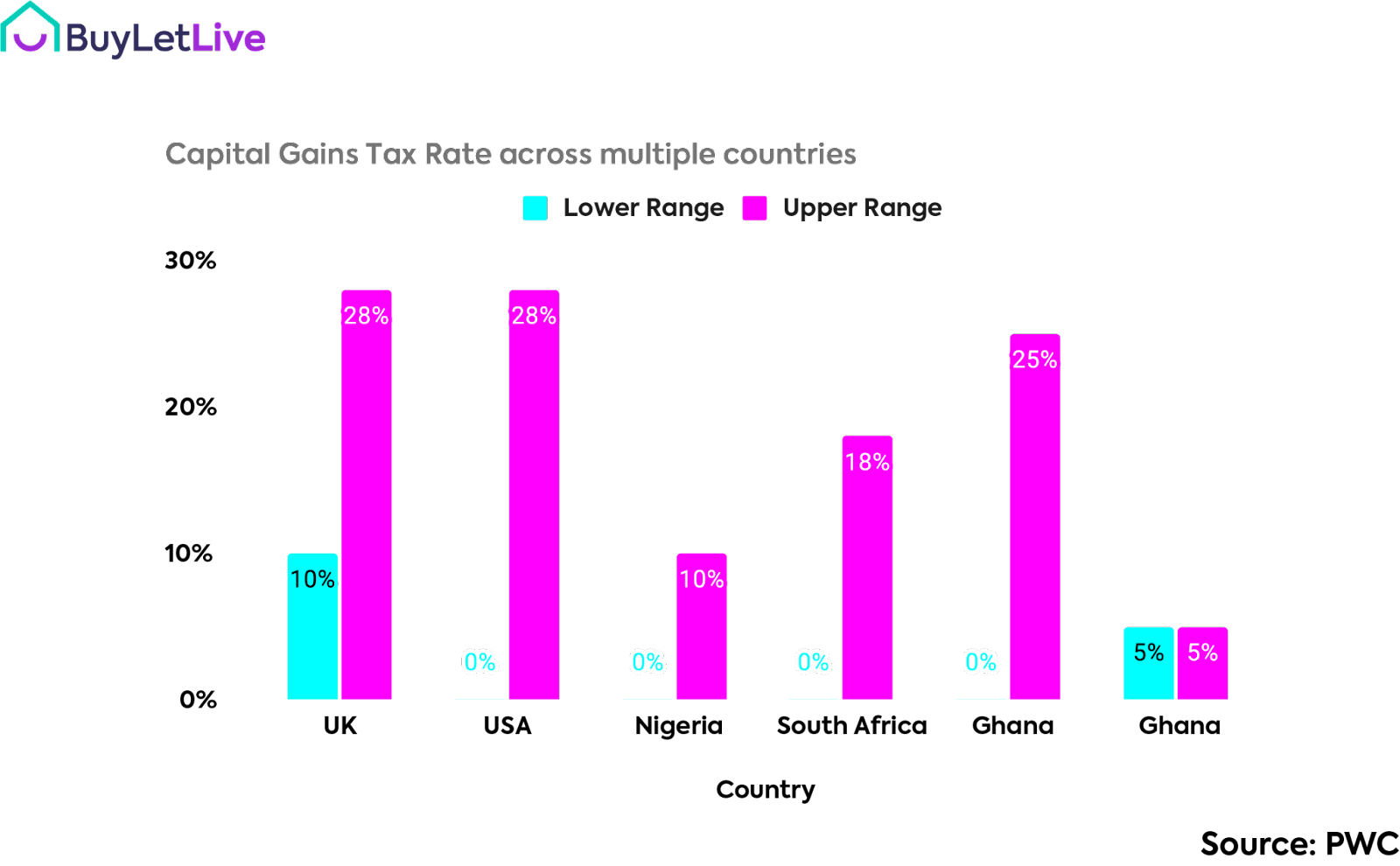 With this trend, renting an apartment for most people may be an ideal decision against buying. With most jobs allowing for remote working, renting provides you with the flexibility to relocate to any country of your choice, without having to bother about disposing of your home or the pain of buying a new home in your new country of residence.

We like to hear from you. Send us your comments to research@buyletlive.com and follow us across all our social media pages to keep updated.

Landscape view is not supported by this site, kindly switch to portrait and reload the page. Thank you.

Hello there! 🤝 How can we help?